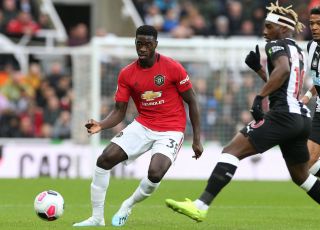 In the the wake of another disappointing result, finding positives is becoming a real task for us Manchester United fans.

Our start to the 2019/20 season has been unexpectedly bad — the worst start suffered by the club in 30 years — and I can’t see when results will start going our way again.

The squad is so light there’s not been a game this season, apart from Chelsea at Old Trafford, when we’ve played well as a unit.

READ MORE: What Solskjaer said after Man Utd’s disappointing defeat away to Newcastle

There was only one shining light against Newcastle.

After playing out of position (left-back) against Arsenal on Monday night, Axel Tuanzebe started in a more familiar role at centre-back in Victor Lindelof’s absence. He partnered Harry Maguire and looked very good defensively whilst always calm with the ball at his feet.

I mean, what’s not to like about a 21-year-old homegrown lad who has already captained Manchester United at every level?

See below as a number of United fans took to Twitter to pass comment on Tuanzebe’s recent display.

Tuanzebe the one bright spark from today! Superb

We can all cuss Utd but I’ll tell u wat, i refuse to have that defeat to Newcastle put a stain on Axel Tuanzebe’s name. He was class! Played 2 positions, bullied Joelinton and threw him into a favela ditch. Then went to RB & Maximin got subbed off. Superb.

Tough watching United again today. Tuanzebe was superb. Must be close to being Maguire’s partner at the back. Proper beast. McTominay full of passion and heart. Need that to spread through the team. Never gives up. Going to keep getting better #NEWMUN

Another terrible performance. One positive. Tuanzebe