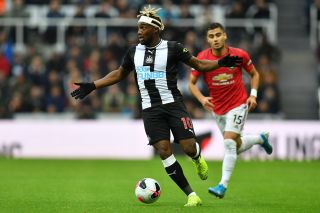 Newcastle star Allan Saint-Maximin trolled a Manchester United fan on Twitter after his side beat the Red Devils 1-0 on Sunday.

Saint-Maximin was one of Steve Bruce’s best players in the hugely impressive 1-0 win over United, but it was debutant Matty Longstaff who scored the game’s only goal in the 72nd minute.

United have been abysmal lately, so perhaps our fans should know better than take any side we face for granted. Let’s not forget how we recently had to rely on penalties to beat League One side Rochdale in the Carabao Cup.

The user in question was obviously pretty confident of a United win — telling the Newcastle player to be prepared to lose.

Saint-Maximin has since replied in attempt to make fun of the United fan, as seen below:

It’s getting to the point now that Ole Gunnar Solskjaer’s job is under serious questioning and it’s only the beginning of October.

United have been awful since Ole was given the job permanently back in March.