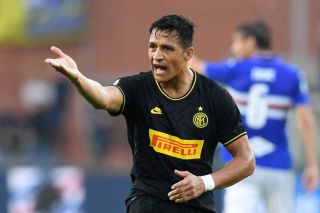 Manchester United are reportedly trying to offload Alexis Sanchez after sending him to Inter Milan on loan for the season.

The Chile international joined the Red Devils from Arsenal in a swap deal that saw fellow disappointment Henrikh Mkhitaryan go the other way. We thought we were getting a great deal at the time, but it didn’t work out as planned for either club.

Sanchez has a truly bizarre spell at Old Trafford. He scored just five goals and provided nine assists in 45 appearances for the club across all competition.

According to The Sun, United want at least £25m from any club who tries to buy him next summer. The main reason being they understandably want Sanchez off their payroll.

It remains to be seen whether Inter will decide to sign Sanchez permanently, but on his agenda next is two international friendlies as Chile take on Colombia and Guinea.

Next up for Antonio Conte’s men is Sassuolo on the 20th when Sanchez will hope to start.

Alexis Sánchez has scored more league goals on his first Serie A start for Inter Milan (2) than he did in the entire 2018/19 Premier League season for Man Utd (1). 🙃 pic.twitter.com/LCeEEnouJK