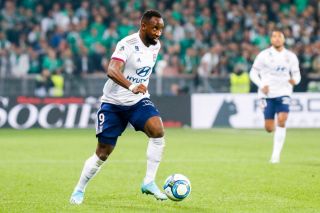 It is no secret that United will look to sign an attacking player in January, with Marcus Rashford misfiring, Anthony Martial out with a thigh injury, and 17-year-old Mason Greenwood still on the team fringes.

While United are also linked to Bournemouth’s Callum Wilson and Juventus’ Mario Mandzukic, they appear most interested in Dembele, and according to the Daily Mail they have been monitoring the 23-year-old’s performances throughout the season.

The Cherries would ask for a big transfer fee for Wilson’s signature, where as Mandzukic is pushing on at 33, so it would make sense to prioritise Dembele knowing he’s already done it in England (Championship), Scotland and now France.

However, there was a slight issue for the scouts sent to the match on Sunday, as Dembele was benched and only played the last half-an-hour.

A report from the Mirror claims he rarely threatened during Lyon’s 1-0 loss.

Nevertheless, the ex-Celtic striker has still made a bright start to the season, scoring six goals in eight games in Ligue 1.

The question now is whether Dembele can be the player to make United an attacking force again?

Solskjaer was criticised for not replacing Romelu Lukaku and Alexis Sanchez when the pair left for Inter Milan during the summer, but if the Norwegian had the funds to sign the player he wanted you can be sure he would be done just that.

And, United have scored just three goals in their last six games across all competitions.