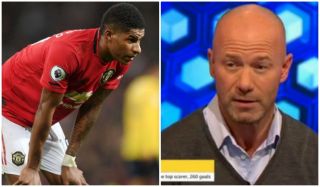 Alan Shearer has suggested Marcus Rashford is not being coached after Manchester United’s defeat to Newcastle United.

A loss at the hands of Newcastle leaves Ole Gunnar Solskjaer’s side just two points above the Premier League’s relegation zone as we enter the second international break of the season.

There has been more pressure than ever put on Rashford to score goals and he hasn’t started the new season strongly. Now the Premier League’s all-time leading scorer, Shearer, claims he is concerned about the guidance he is receiving behind the scenes.

“I have sympathy with him because this United team is the worst team that I can remember for a number of years and it would be very frustrating as a forward because of the lack of quality and the lack of balls that are coming into the box,” Shearer said on Match of the Day 2, as quoted by the Manchester Evening News.

“But I just wonder, I analysed him a couple of weeks ago at West Ham and exactly the same things were happening today as they were then — there is no movement. I wonder if anyone is actually saying anything to him because nothing has changed.

“He’s not moving into the box and he’s making it far easier for the defenders than it should be but he is young, he is still learning and it has to be very frustrating for him because that team at the moment is awful.”

READ MORE: Gary Neville reveals who is to blame for Man Utd’s fall from grace

Former Arsenal defender Martin Keown weighed in to add he feels sorry for Rashford but that he should still be doing better.

“You look at it and Dan James must be thinking ‘who have I signed for here? He’s the youngest but the best player,” Keown said.

“They are so inept in possession, Fred, it’s almost becoming a joke when he gets the ball. I know it’s good closing down but you’ve got to be able to control it and pass. If that’s the centre midfield, there’s nothing really going to be created.

“They started playing balls long into Rashford and I feel sorry for him because he survived on scraps but he should do better. If you look at his body language, I think he’s starting to despair for what is around him.

“Rashford should be getting into the box, he’s got to get into that area. A number nine for Manchester United scores goals in there. He should protect the ball better. I don’t really want to have a go, particularly at him, but I do feel he is a magnificent player but he’s no affecting the defender. He’s not getting the service, it’s a combination of the two. He wasn’t effective.”

The fact of the matter is the 21-year-old has bags of potential, but he simply hasn’t been living up to the hype of late.

Rashford’s efforts in front of goal must improve soon, otherwise, he risks losing his place in the team when Solskjaer signs a centre-forward.

The England international should try make one of the wide positions his own — for club and country – and that way he can start to focus on his career objectives.