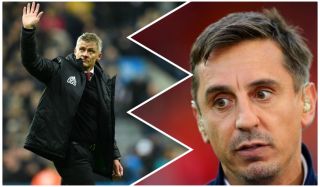 Gary Neville is of the opinion that the poor recruitment made by the Manchester United board is responsible for the Red Devils’ current form.

Ole Gunnar Solskjaer’s side fell to 12th in the Premier League table after losing to Steve Bruce’s Newcastle United at St. James’ Park on Sunday.

A goal from Matty Longstaff in the 72nd minute was enough to beat United as our awful away form continued.

Neville feels the club’s board had made some poor recruitments over the years and needs to make another six signings.

Speaking to Sky Sports, Neville said: “Their recruitment has been woeful for many years and they’ve been all over the place in terms of different styles of managers who are bringing in players. They now need to fix the style, fix a way of recruiting and go and get the players. They got three in the summer of the right type, they’ve done OK so far but they need another five or six.

“They need another centre-back, they need a left-back, they need two central midfielders, they need a wide player and they need a top centre-forward. They need five or six top players in that squad and they’re going to cost a lot of money. Hopefully they can be supplemented by the young players coming through, because there is some talent in those players.

“The board need to hold their nerve. They’re responsible for this with poor recruitment, poor selection of managers, going with them and then pulling off them. They’ve also different styles of managers, with Ole Gunnar Solskjaer now taking the club a completely different direction. If you change direction as a board every two years, investing £250m along the way in each manager, you’re going to have big problems.”

Daniel Harris, who writes for The Guardian, doesn’t really agree with Neville’s views on the transfer market. You often hear about Solskjaer needing another two or three transfer windows, but why does anyone think the Glazer family and Ed Woodward will invest any differently?

Gary Neville loves that “United need a few transfer windows” guff. They could do everything in one, maximum two, if the owners weren’t intent on milking the club for every possible penny. But again, nothing.

A midfielder and striker would have been signed in the summer if Solskjaer really had a choice in the matter. It’s an absolute joke that the biggest club in England went into the season so unprepared, despite sacking José Mourinho in December 2018 and having all that time to ensure Solskjaer had everything he needed for the new campaign.

More incompetence on their behalf.