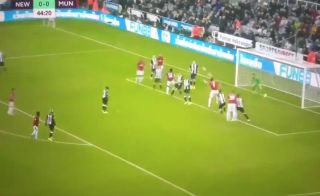 Harry Maguire had a golden opportunity to open the scoring against Newcastle United at St James’ Park.

It’s been another dull display for the Reds with Newcastle not suffering many threatened moments, with the scoreline 0-0 at half-time.

The Manchester United centre-back should have put the Red Devils ahead on the brink of half-time.

A free header inside the Newcastle box from a corner, Maguire shouldn’t need a second invite to score against Steve Bruce’s side.

Check out the missed chance below (via NBC Sports Soccer):

Harry Maguire nearly puts Manchester United ahead before half! pic.twitter.com/JufGvIVYjv

Maguire’s miss 😨, should be 1-0 United.
That said, he has been class defensively. 🔴 #MUFC #NEWMUN pic.twitter.com/5o8CNYeeKO