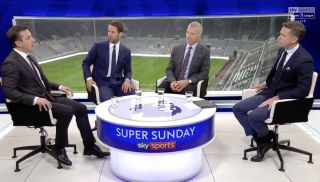 Gary Neville, Graeme Souness and Jamie Redknapp are in the Sky Sports studio for Super Sunday, hosted by David Jones.

Both managers for the match at St. James’ Park — Newcastle vs Manchester United — are under pressure to get results after a challenging start to the season.

Steve Bruce at Newcastle was a very unpopular appointment after Rafa Benitez, who their fans wanted to stay on the back of last season. They lost 4-0 to Leicester City last week and he probably can’t afford another hammering.

Ole Gunnar Solskjaer, on other hand, knows he’s managing the biggest club in England and has thus far done a below par job of that. He needs to his players to get on a winning run and put the previous weeks behind them.

Jones asked the panel which of the two managers is under most pressure. Neville answered first, as seen below via Sky Sports):

Who is under more pressure, Steve Bruce or Ole Gunnar Solskjaer? 🤯@GNev2 played with both managers at Manchester United and discusses the situation at their clubs. ⚫🔴

Neville comes with the view that both have tough jobs. Bruce, who he says was very good to him during the early days at MUFC, faces a real uphill climb to get the Magpies back on track. He can only win over the fans by getting results and it doesn’t help that Sean Longstaff is struggling in midfield.

Solskjaer is a lot young with less experience and there’s a lot more expected of him as Manchester United manager. Neville wants the owners to back Solskjaer in the transfer market as well as give him time to clean the mess that was created before his arrival.

Kick-off today is at 16:30 and we’ll have updates on the blog and Twitter throughout the game.