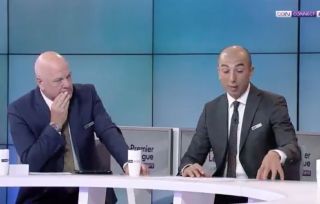 Andy Gray is at it again.

The former Everton and Scotland striker often pops up with a controversial opinion and this time he takes aim at Manchester United manager Ole Gunnar Solskjaer.

Now a pundit for beIN Sport, Gray said that he doesn’t think top footballers will come to Old Trafford to be managed by Ole Gunnar Solskjaer if the likes of Pep Guardiola, Jurgen Klopp or Mauricio Pochettino are also looking to sign them.

In conclusion, Richard Keys asks are the days when Manchester United could attract the biggest names gone?

Joined by Belgium manager Roberto Martinez, Gray jokes that there could be a pause in the system, but the biggest issue I take is players would play under Solskjaer if United were at least showing signs of improving.

Of course, there is irony to all of this. Gray mentions a few managers (listed above) who footballers would rather play for, but when doing so he names Juventus but pauses on Maurizio Sarri showing that he completely forgot his name.

However, Martinez makes a more valid point in saying top players want to playing in the Champions League. Not securing a spot in next season may put United’s pursuit of Jadon Sancho in greater doubt knowing established teams in the competition will be sniffing around the Borussia Dortmund sensation.

But let’s not forget the signing of the world’s most expensive defender Harry Maguire. Pep Guardiola made it no secret he was a fan of the England international and during a summer they lost veteran Vincent Kompany, City should have signed a top centre-back.

Manchester United is still a huge football club. Still one of the biggest in the world.

What Gray forgets to mention is the biggest problem at Old Trafford. The real reason players should be put off joining the club.

The Glazer family, their puppet Ed Woodward, and anyone else working for the club who prioritises commercial deals over on-pitch success.