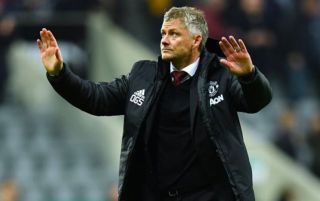 The pressure continues to mount on boss Ole Gunnar Solskjaer after Manchester United fell to another dismal away defeat at the hands of Newcastle United.

Newcastle, who had been beaten 5-0 just a week earlier by Leicester, matched United toe for toe and fully deserved all three points.

Matty Longstaff scored the only goal of the game midway through the second-half, finishing off a Newcastle counter with a well-struck shot past David De Gea.

United offered little in response to Longstaff’s opener; the best chance for the Reds came in the first-half when Harry Maguire somehow missed a free header from Ashley Young’s corner.

Solskjaer’s side are now sitting in 12th position in the Premier League table going into the international break.

It’s not going to get any easier for the Reds either, with leaders Liverpool up next at Old Trafford in a fortnight.

United have endured their worst start to a league season in 30 years, and have not won away game since PSG at the Parc de Princes in March.

As revealed by the stat below, it’s the first time Manchester United have gone eight games without an away victory since the Premier League began.

📉 Man Utd:
🔴 Have gone 8️⃣ away games without a win for the first time in PL history
🔴 It’s their longest away winless league run since 1989 (a run of 11)#NEWMUN pic.twitter.com/VdfvUbj1JY