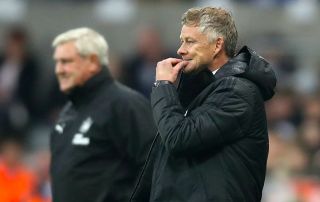 Manchester United have fallen to another away defeat with a 1-0 loss at the hands of Newcastle United.

It’s now 11 away games for the Reds without an away victory; a sorry state of affairs for Ole Gunnar Solskjaer.

Serious questions will now be asked as to whether Solskjaer can turn things around, as there is little sign that there will be an upturn in these abject performances.

United were missing key players Paul Pogba and Anthony Martial against Steve Bruce’s side, but that doesn’t excuse the lack of chances created against a team that conceded five against Leicester last weekend.

Matty Longstaff scored the only goal of the game on his Premier League debut, driving a shot home past David De Gea from 20 yards out.

But even when Newcastle had taken the lead, the lack of potency and intensity going forward for the Reds was worrying to say the least.

Solskjaer’s men failed to establish any authority in the match and can not feel hard done by over yet another awful result.

See what fans had to make of the defeat:

The very fact that people are (some in jest, some absolutely serious) even entertaining the idea Man United are in a relegation battle shows you the situation the club is in.

I challenge anyone to try and defend this and say why Solskjaer should be given more time?

This once again falls at the hands of Ed Woodward who has failed once again in his 4th attempt of appointing a manager. Get that poison out of our club otherwise nothing ever changes. Our naivety and arrogance deserves relegation. We’ve stood still as a club for 10 years.

Solskjaer was let down badly when two experienced midfielders and two experienced forwards were allowed to leave and only a youngster from the Championship came in their place. But can he pick a better XI than he is doing?

Shocking from #mufc. No belief, no creativity. Fans showed more defiance than the players. United can get rid of Solskjaer but that simply masks the problem: Woodward & the Glazers. Too focused on profits, not the football. Director of Football required urgently, rebuilding squad

The club is rancid, this is the end result of a club that's run like a business that forgot it was a football club, the result of greed, of profit dominating every decision, it breaks my heart but it's the Utd the board and owners deserve.

Solskjaer looks like a man who knows he’s incapable of turning things around #MUFC.

I know it's been in the post, but it is stunning it's this bad. They genuinely look like a team that could be relegated.

This is the super-club era, where immense resources generally insulate you from a certain level of ineptitude. Jesus Christ.