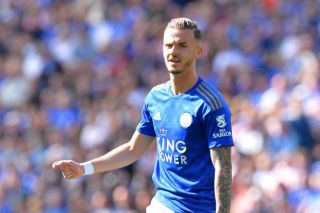 Tottenham Hotspur are reportedly eyeing up a move for Leicester City star James Maddison in their quest to replace Christian Eriksen.

The Danish international’s current contract with the club expires in the summer and he is yet to sign a new one. It doesn’t feel like he will either with Mauricio Pochettino not starting Eriksen as often as he did last season.

Spurs feel that Maddison is the perfect replacement for Eriksen, according to the Daily Star, as cited by the Mirror.

The Leicester City attacking midfielder is among the finest talents in the Premier League after taking to life in the Premier League very quickly after joining The Foxes from Norwich City a year ago. So far, Maddison has scored nine goals while providing as many assists in 45 appearances across all competitions.

The 22-year-old is playing great football again this season under Brendan Rodgers, who will be want to fight off any interest in one of his best players. This season he has two goals and two assist in seven appearances.

Tottenham aren’t the only club closely monitoring Maddison this season tough, as The Sun claims United are stepping up their pursuit of the £80m-rated playmaker.

“There’s no hiding place, because it comes to MNF and @Carra23 and @GNev2 are stood there pointing you out, with a circle around you, in slo-mo!”

In the latest Off Script, @Madders10 chats candidly with @SkySports_PatD about MNF, cricket, being famous and staying humble

Maddison looks exactly the sort of player United should be trying to sign. He’d be a huge improvement on Jesse Lingard for starters.

We can’t keep blaming the strikers for misfiring if we haven’t got the players to create and out chances on a plate for them.

Maddison and another speedy winger, as well as a striker, is needed at Old Trafford.