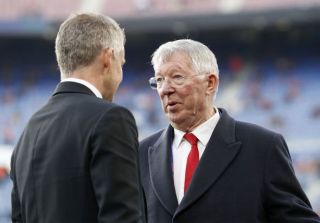 A promising player during his time at St. Mirren, John McGinn is one of the most talked about footballers in the Premier League this season.

Few from his St. Mirren days would have imagined McGinn attracting the attention of Manchester United but reports claim he already has.

From the Scottish Premiership, to the Championship, to the Premier League. McGinn is going up the football ladder and Old Trafford could be at the top.

According to The Athletic via The Sun, the scout who brought McGinn to England has suggested Sir Alex Ferguson is going to urge United chiefs to make a move for the midfielder.

The article goes on to suggest that he could cost around £50m.

Moreover, Ferguson apparently recommended McGinn to United a year ago but the club wanted to give the player time, to see if he could make the grade in the top flight.

With three goals to his name it’s time for the big clubs to assess McGinn to see if he’d make a positive impact elsewhere.

Villa fans won’t like the sound of losing one of their best players but they’re surely used to that at this stage.

They gained promotion with a squad full of loan players this season — including United’s Axel Tuanzebe.