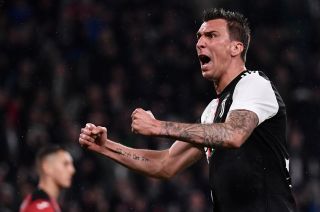 Manchester United are in pole position to sign Mario Mandzukic with the Croatian striker still being linked with a move away from Juventus.

It’s been a difficult start to the new season for the Red Devils, and a lot of that is being put down to not replacing Romelu Lukaku after selling the club’s only out-and-out goal scorer.

United currently sit 10th in the Premier League. We have nine points on the board after seven games!

In those seven outings United have managed just nine goals, with four of those coming in the Premier League opener against Chelsea.

In turn, it’s obvious to see where Ole Gunner Solskjaer’s biggest problem is. To win games he needs to get his players scoring goals.

Injuries to Anthony Martial and Marcus Rashford haven’t helped, but neither striker has netted 20+ times in a single season, so why do we think that will change this season?

According to Calciomercato, United are in pole position to sign Mandzukic and he continues to seek an exit after turning down a love to Qatar.

A move to Old Trafford would be a good opportunity for the Croatia international to play in England, with one of the top teams.

It would be a short-term signing but who cares if he can bring us goals?