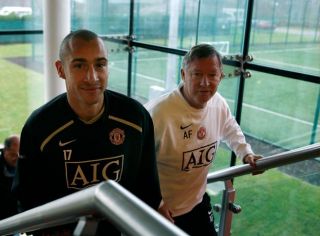 Brought in on loan to help the Red Devils challenge for the title in 2007, Larsson helped Sir Alex Ferguson’s side pick up vital points during a crucial part of the campaign.

During that spell, I remember watching Larsson’s movement on and off the ball thinking ‘woah, he’s got to be one of the most intelligent footballers I’ve seen’ and that stands to this day.

Despite only playing 7 league games, Larsson wanted granted special dispensation for a medal after a request was made by then manager Ferguson. It is revealed during the interview that he’s still waiting for his medal!

When asked what he thinks has gone wrong at United, the former Sweden international said: “In the wake of Sir Alex, you started off with Moyes, Van Gaal, Mourinho you can’t forget that means a lot of change in personnel.

“I think that the culture from the players that’s been in the past has gotten lost a little bit, there’s some talented and some good players but there are also some players who are not good enough to play for United who are there.

“I think what Ole is trying to do is to establish that culture again, you can’t forget we had some great players as well, it’s going to take time, in order to turn it all around it’s not going to be a quick fix… you need to give Ole the time.”

Larsson explains in the interview how Solskjaer was good to him during his brief spell at Old Trafford and why he backs the Norwegian coach to turn things around.