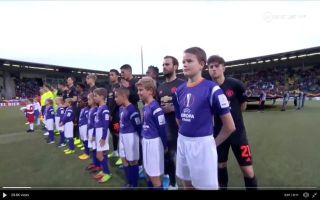 The Wales international looked lost behind a mascot that appeared as tall, if not taller than he was, before the game started.

He was definitely the tallest mascot too, which makes it funny that he stood with James of all players.

Nothing would have been said had the mascot been stood with Nemanja Matic or one of the centre-backs.

Watch below thanks to B/R Football:

At least we have something to laugh about from the scoreless draw.