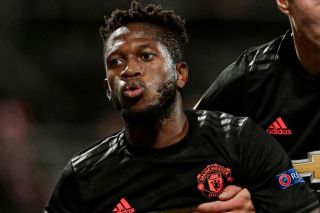 Michael Owen and Owen Hargreaves gave their assessments of Fred’s performance for Manchester United in the Europa League on Thursday.

As per usual in the BT Sport studios for Europa League action, Owen and Hargreaves had their say on United’s poor display against the Dutch side, in which Ole Gunnar Solskjaer’s side did not manage a single shot on target as the game finished 0-0.

United’s latest result means our long wait for an away win goes on, with the last victory come in March against Paris Saint-Germain. That’s the longest wait in 30 years as it currently counts for 10 away games!

Fred started against AZ Alkmaar with the manager keen to allow the Brazilian make a claim for the team by impressing in the Europa League.

Sadly, that wasn’t the case…

Instead the Ex-Old Trafford duo singled Fred out for criticism after the match.

As per the Metro, Owen began: “He’s just a moderate player, isn’t he? That’s the bottom line.

“We were discussing what his best position is, I probably think it’s a No.6, Owen [Hargreaves] thinks it’s No.8.

“But once we start arguing about it you think he can’t do either role that well.”

I don’t know what’s worse, Owen being right or Fred being abysmal?

Probably the latter as he’s been so disappointing since his 2018 move from Shakhtar Donertsk in a £52m deal, as per The Telegraph, and José Mourinho who signed him made it clear he wasn’t a fan in the early stages of his United career by not starting him in games.

I genuinely mean this.

Hargreaves weighed in on Fred’s struggles, insisting that he blew another big opportunity to prove himself to Solskjaer and the United fans.

“Regardless of where you play you cannot afford to give it away as much as he did tonight,” said the former United midfielder (via the Metro).

“And he gave it away a lot. I think there’s a really good player in there, I don’t know why we’re seeing him play like this.

“At Shakhtar, he had some terrific games, that’s why Manchester City were interested in him.

“But today was not the level he is up to. He’s really good on the ball, he’s got two feet, whether it’s a confidence thing.

“It was a big opportunity for him to step up and play really well, and he did the opposite.”

The hill Fred needs to climb to prove himself as a United player is only getting steeper.

It may be time to give James Garner a run since he continues to impress for the U23s, who are going much better this season.