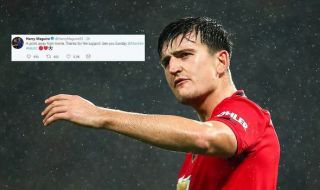 Harry Maguire posted a tweet after the goalless draw against AZ Alkmaar on Thursday, but he has since deleted it after it didn’t go down well with certain supporters.

The world’s most expensive defender at £80m arrived from Leicester City in the summer but didn’t feature in the Europa League fixture as manager Ole Gunnar Solskjaer opted for Victor Lindelof and Marcos Rojo at centre-back.

United kept a clean sheet in Maguire’s absence but he will return to the line-up on Sunday when Solskjaer’s men take on Newcastle United. AZ Alkmaar had 12 shots on goal (4 on target) but United’s defence and David de Gea sniffed out the result as the Red Devils were poor in front of goal themselves, failing to get a single shot on target.

Solskjaer wanted to talk about the positives (?) after United’s 10th consecutive failure to win away from home, the club’s worst record in 30 years.

Quoted by The Mirror, the United manager said: “It’s a good point away from home against difficult opposition on a difficult surface.

“They beat Feyenoord 3-0 away from home, we made many changes so I’m very pleased.”

Maguire took the same approach with his post-match views and it resulted in a backlash from some fans.

He tweeted, as pictured below and sourced from the Mirror: “A point away from home. Thanks for the support. See you Sunday.”

Especially as a new signing, his tweet was pretty cliche and it goes with the narrative that he will come in and lead Solskjaer’s men on the pitch. A potential new captain.

I just find it wrong that he’d get negative feedback for that. Just for the sake of posting a tweet.