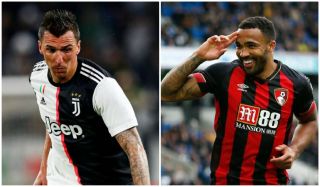 It sounds like Manchester United have prioritised the signing of a striker in the January transfer window, and Sky Sports claims the Red Devils are lining up moves for Bournemouth’s Callum Wilson and Mario Mandzukic of Juventus, as cited by The Sun.

United have been atrocious in front of goal this season, with the latest game being a scoreless draw away to AZ Alkmaar in which Ole Gunnar Solskjaer’s side failed to get a single shot on target.

Juventus striker Mandzukic turned down a move to the Qatar Stars League in the summer, with reports claiming the Croatia international is holding out for a move to Old Trafford.

Aged 33, he would come with plenty of experience from his domestic and international career, but Solskjaer thus far has targeted much younger players than Mandzukic. It could be the manager’s first short-term signing.

Wilson, however, has started the season in blistering form with five goals in seven Premier League games. He fits in with Solskjaer’s other signings being English, but the Cherries will demand a big transfer fee for his signature.

If Callum Wilson was called Wilsondinho and was from warmer climes, I get the feeling #MUFC fans would be more enthusiastic about him.

At 27, he’s ready for a step up but his previous ACL issues are a concern. He’s a quality finisher, though, one of the best in the PL.

Ate 27, Solskjaer must decide if United are getting the right player at the right time. These decisions haven’t been thought properly about before being made previously, when you consider Radamel Falcao’s spell at the club.

Chelsea were closely linked to Wilson last January but couldn’t agree on a price with Bournemouth at the time and signed Gonzalo Higuain on loan instead.

Moving for Mandzukic would be less complicated because he’s not part of Maurizio Sarri’s plans moving forward.