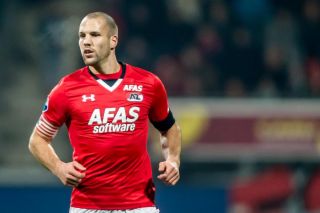 AZ Alkmaar defender Ron Vlaar, formerly of Aston Villa, appeared surprised by the lack of quality show from Manchester United in the 0-0 Europa League draw on Thursday, stating that the Red Devils had to cope with the intensity of the hosts rather than the other way around.

United are not what they once were. We don’t know if Vlaar still watches the Premier League, but we’ve been woeful in front of goal all season.

Solskjaer sounds like he thinks United are on the right path. After all the club is supposed to be making a big transition, but it doesn’t work if the board and owners aren’t on the same page.

“During my time at Aston Villa I played against better Manchester United teams than this one,” the 34-year-old said after the match, as quoted by Goal.com. “Although, they didn’t play with their best starting XI today.

“In the Premier League they play with high intensity, which I experienced myself, but United didn’t show that today. I even think they were the ones who had to cope with our intensity, and that is a great compliment to us.”

Vlaar took a dig at United, but he played against the Red Devils during Louis van Gaal’s reign as manager and given he played at the 2014 World Cup under the former Netherlands manager, we think he’s simply blowing smoke up his hole with these comments even if he’s not wrong.

I’m also pretty sure he was linked to United on one occasion, when the Dutchman was struggling to find a fix for his defence.

Van Gaal was in attendance to watch his two former clubs face off.

Solskjaer, almost worryingly, had a different take on the game, stating that his side picked up a good point against AZ Alkmaar.

Check out his post-match interview with BT Sport below:

Ole Gunnar Solskjaer was fuming with the decision not to award his side a penalty after Marcus Rashford was brought down…@DesKellyBTS pic.twitter.com/LpIr7osD3l

“It’s a good point away from home against a difficult opponent on a very difficult surface,” he said. “We made many changes and I’m very pleased.

“Of course, it should have been a win — I’m fed up talking about penalties we should have had, Arsenal on Monday and now,” Solskjaer added on Stijn Wuytens’ late tackle on Marcus Rashford. “That’s a penalty 101 times out of a hundred.”