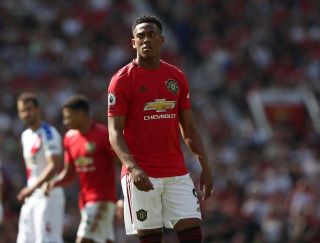 Anthony Martial’s recovery from injury is taking longer than expected and Manchester United are missing his goalscoring threat on the pitch.

Manager Ole Gunnar Solskjaer has not yet given a return date for the Frenchman after missing the last seven games.

Last night against AZ Alkmaar, the Red Devils did not have a single shot on target as the game finished 0-0, and Martial had been scoring goals before he picked up the thigh injury that’s keeping him out.

It doesn’t help that Marcus Rashford has been injured and struggling to find form, but perhaps having Martial back can give everyone a much needed boost.

The French striker has been quiet on social media since getting injured in late August.

Martial sent a message to fans prior to United’s clash with the Dutch side and said he is doing all he can to get fit.

“Working hard to come back stronger #AM9,” he said on Instagram.

Working hard to come back stronger #AM9

The post got a reply from former Manchester United striker Dimitar Berbatov, who was a senior player at AS Monaco when Martial was breaking through.

Berbatov expects the 23-year-old to come back with a bang.

Judging on what we’ve been subject to in recent weeks, Martial will vastly improve United’s attack again and hopefully make us a side to be feared again.

Fingers crossed Martial makes it back for Newcastle on Sunday because we need him!