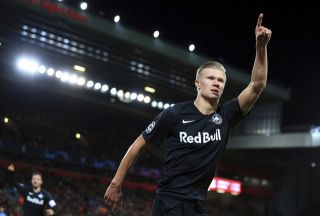 Liverpool’s 4-3 win over Red Bull Salzburg had plenty of drama. The Austrians battled back from 3-0 down to make it 3-3 before eventually losing the game.

But the only angle that really interests us is target signing Erling Håland scoring the equalising goal after coming on as a substitute.

The Manchester Evening News linked the youngster to United and last night’s goal will help the Norwegian striker to win admirers at Old Trafford.

It’s one of the easier goals you will see Håland but he’s banging them in this season. Two games in the Champions League, four goals.

Watch his goal below (footage from BT Sport):

Look at the celebrations! pic.twitter.com/y3nGFkmxUD

The one thing I noticed whilst watching Håland last night was his physical presence and running technique. He drives with the ball at his feet and looks a constant threat.

No wonder Ole Gunnar Solskjaer likes him from the striker’s time at Molde. It will be interesting if he performances in the Champions League this season forces the Red Devils to make a move.