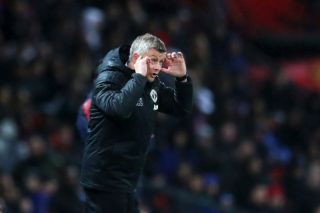 “The Definition of Insanity is doing the same thing over and over again and expecting different results.” It’s a phrase often used although no one really knows who said it. But right now the United boss is running the risk of heading in that direction with his team selections.

It some respects it feels harsh to criticise Ole for this. He’s had to cope without Martial for the whole of September and Pogba for most of it and those two have, arguably, been United’s main focal points for attack. It’s also worth considering that, although he authorised the departures of Lukaku and Sanchez, he was probably expecting them to be sold in July, when he had time to get at least one new attacker in, not right at the end of August, after the Premier League transfer window had closed, when he was forced to cope with a wafer-thin forward line. Nevertheless, Ole is totally blameless.

As United have toiled we have seen the likes of Jesse Lingard, Andreas Pereira and Juan Mata continue to start games. We all love Juan Mata, it’s almost impossible not to, but sadly, at this point in time, he just isn’t providing the same creative spark he once did. Lingard and Pereira are academy products and whilst it’s nice to see those players in the team, it shouldn’t be an automatic pass to a start. Lingard hasn’t been directly involved in a Premier League goal in 2019 and Pereira has just one assist to his name this season and no one really seems to know what his actual position is. This level of performance should not be acceptable for players who are starting every week. Whilst Ole’s loyalty to them is admirable, there comes a point where loyalty to someone not performing to the required standard becomes insanity.

So, what the alternative? Well, there are a few options. When Pogba is fit one option could be to use him in the role that is being swapped between those three, behind the striker where his creativity and threat can be pushed 10 or 15 yards higher up the pitch. In this instance, we would require someone to come in for Pogba in the deeper role alongside Scott McTominay. Well, we currently have a £50m+ midfielder, in Fred who rarely sees anything other than the substitute’s bench. Some would argue that Fred hasn’t performed when he has been picked, but many others would counter by saying that it’s extremely difficult to perform to the required when you play one game out of every four or five. Should the Brazilian perhaps be given a run of five or ten games to show what he can do, just like Lingard and Andreas have been?

Ole has also said that he would not be afraid to throw his younger players into the mix in the Premier League, but so far his actions have not spoken louder than his words. Other than a start in an unfamiliar left-back role for Axel Tuanzebe (and what a job he did) we haven’t really seen these young players in any meaningful Premier League action. Mason Greenwood has had the odd ten-minute cameo, but otherwise, we have seen very little. Maybe it’s time to follow the lead of Frank Lampard (who, granted, is working under different circumstances) and have the guts to give the youngsters a chance and see what they can do. Although Greenwood is 18 he looks hungry and ready. Marcus Rashford has sadly looked shorn of form of confidence for a while. Could shifting him to the right and bringing Greenwood in help our scoring issues, whilst when Martial is back, shift Greenwood to the right. A short spell out of the team could be the tonic to rejuvenate Rashford.

If Ole wants to keep Pogba in his deeper role then perhaps he needs an angel, Angel Gomes. Firstly, all the best people are born on August 31. Ok, now to be serious. The youngster may look like a strong gust of wind will carry him to the Land of Oz but don’t let that fool you. He is quick, creative and a good dribbler with a low sense of gravity, everything Lingard and Pereira once were. With his age comes to the fearlessness of youth, particularly as fear it what seems to have taken hold of many senior players who often take the safe option for fear of trying and failing to make the riskier pass. Is Gomes good enough? Frankly, I don’t know, but unless he’s tried we will never know. We are struggling for creativity right now and it’s a lot of pressure to put on someone so young, but unless you give them a chance you don’t know if they are up to it or not.

Or maybe Ole wants to play Pogba in that more advanced role but, having lost Herrera, he simply doesn’t trust Fred so has to use him there to compensate? Well, the youth could again provide the answer. It looks as though James Garner has outgrown Under 23s football at the age of 18 as he dominates games at that level. Perhaps it’s time to put him in alongside McTominay and see if he can make a difference to the speed of our play.

I don’t want to seem like I’m spewing hate towards our own players and would certainly love for them to prove me wrong but right now it seems obvious to all that something isn’t working. Until January at least, when we have a chance to try and fix it, perhaps it’s time to try something different and put some trust in the United academy again.