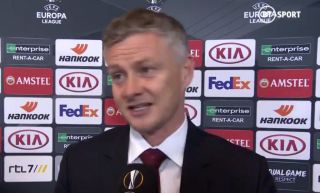 Manchester United made some unwanted history tonight against AZ Alkmaar.

Unfortunately for manager Ole Gunnar Solskjaer, it was because United became the first Red Devils outfit ever to fail to register a spot on target in the Europa League.

Eggs firmly on our face…

United laboured to a 1-0 home win over FK Astana and continued their shoddy form tonight, failing to threaten AZ Alkmaar throughout the game which ended 0-0.

READ MORE: ‘A good point away from home’ explains Dalot after 0-0 draw with AZ Alkmaar

We were missing several regular first-team players but we were atrocious, unacceptably bad, and failed to create a single decent chance.

Solskjaer is right to argue United should have been awarded a penalty, as quoted by the Manchester Evening News.

“Very happy with the boys, we come away with a good performance. Should have been three points, a nailed on penalty. You can’t even discuss it.

“Good performance against a good opponent on a very bad surface.”

On the penalty itself, Solskjaer added: “I just couldn’t believe what I saw. Same as Arsenal, the handball that should have been 2-0. It’s frustrating now these little things because the boys deserve more.”

Solskjaer echoed those sentiments in another post-match interview with BT Sport, as seen below:

Ole Gunnar Solskjaer was fuming with the decision not to award his side a penalty after Marcus Rashford was brought down…@DesKellyBTS pic.twitter.com/LpIr7osD3l

Brandon Williams started at left-back and played well as he made his first full debut. The manager was happy with what he saw from the youngster, saying, “Top class, top performance for a full debut. So happy for him. He’s got no fear, he’s brave, wants the ball, takes people on, tackles, he’s physical. So happy for him.”

Jesse Lingard picked up an injury against AZ Alkmaar tonight. Solskjaer was asked about it and said: “I think he felt his hamstring, I don’t think he’s too bad. Probably not Newcastle but ready for Liverpool.”

That’s a hint that we’ll see Lingard start against the Scousers after the international break.

I don’t know how I feel about that but Angel Gomes did himself no favours tonight.