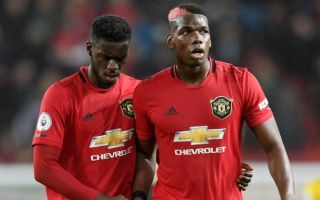 Ole Gunnar Solskjaer has yet to confirm whether Paul Pogba will return to the Manchester United squad for the Premier League game at Newcastle on Sunday, though he did admit the main reason the French midfielder was left behind for the Europa League match on Thursday night is fears over the playing surface.

The game will be played at Den Haag’s stadium which has an artificial pitch. It had to be moved because AZ Alkmaar’s stadium was damaged by a storm last month.

Due to Solskjaer’s knowledge of artificial pitches, the Norwegian confessed he would not have risked the player anyway.

“After discussions with the specialist we decided Paul’s ankle injury would benefit from further treatment and rest, but I wouldn’t have risked him on AstroTurf anyway,” Solskjaer said, as per The Guardian.

“I’m surprised AZ have chosen to play in this pitch, to be honest. Coming from Norway I’m used to AstroTurf pitches and this is not one of the best I’ve seen, it’s actually one of the worst. The artificial surfaces we have in Norway are a lot more modern.

“I’m not saying this one isn’t safe, but it seems like it’s been used a lot. I’m surprised anyone would need AstroTurf in this sort of climate. It’s OK when you live near the north pole, like we do, otherwise you would never get a full season, but I can’t say I’m a fan of artificial surfaces instead of grass.”

The United manager is of the view artificial pitches can exacerbate old injuries and cause new problems – “with my knees I’ve never really enjoyed it” – and how it can alter the nature of the game. “I’m not complaining or trying to get excuses in early, it’s the same for both teams and we’ll just get on with it,” he added.

“But you have to play a different style of football on AstroTurf. You get a lot fewer tackles because players are reluctant to go to ground, and you find it is easier to pass because the ball tends to run true. We were always going to make a few changes for this match, it’s not so much the pitch as the fact it is a week of three games, but the knowledge that the middle one is going to be played on AstroTurf has to be factored as well.”

Solskjaer is expected to field a mixture of youth and experience, as he did against FK Astana in the first group match. Tahith Chong has travelled with the squad and has the opportunity to show his ability against a side from his home nation.

Mason Greenwood is expected to start too, and Angel Gomes is back from injury after not featuring since the first Europa League game of the season. Axel Tuanzebe will be given a chance to impress again in defence and Diogo Dalot is likely to start at right-back.

However, Solskjaer will be wary of AZ Alkmaar after United’s laboured 1-0 win over Astana. He will also be aware that his side have yet to win away this season (the last win coming in March against PSG).

“AZ are a young team too, and you just hope that something goes right and confidence grows so that you end up with one of those feelgood nights. I don’t believe our away form has been that bad, we are a good team that can set up to play on the counterattack, but we just haven’t been able to finish the away games off as well as we would have liked. I don’t like to keep being reminded the last time we won away was in March, I prefer to look forward and believe something might happen.”

The manager must believe, with the work he’s doing, that it will happen. That will get grow on the players whom he is trying to implement his tactics.

We haven’t had a good performance in a long time. Hopefully we are talking about one later.