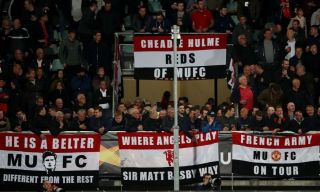 Manchester United limped to a Europa League point in The Hague after the stalest of stalemates on a plastic pitch on match day two.

I suppose any away point in Europe is a good one and United remain level on points at the top of Group L but, goodness, that was dire. The positives – a decent defensive showing, a point and a clean sheet.

These player ratings aren’t pretty at all. Spoiler – no one gets more than 6.

Had virtually nothing to do. Made a couple of good saves in the second half but nothing you wouldn’t expect. It was a surprise to see him start with Sergio Romero the usual cup keeper.

Good to see him back but on a night when no one stood out, Dalot didn’t go forward much and was solid if unspectacular in the absence of Aaron Wan-Bissaka.

The Swede made his first European appearance of the season and made one good interception to thwart Teun Koopmeiners in the first half. He did his job when called upon on a difficult playing surface.

Moved into the centre-back role alongside Lindelof, Rojo again was much of a muchness. Played a part in the clean sheet and rarely looked troubled.

The exciting young left-back set pulses racing when his name was announced on the team-sheet. Impressive against Rochdale, he stuck to his task but didn’t bomb forward as much as I’d have liked. Nevertheless, a bright future beckons.

You might as well put a traffic cone in midfield. It would still offer more than Matic. Cumbersome and dreadful.

Fred’s a magician alright – he’s very good at disappearing. Awful. Anodyne. Lightweight and offers less than nothing. Time to cut our losses and get rid. A reminder that this bloke cost us 52 million. 52.Million. How he didn’t get taken off I will never know.

Anonymous yet again. If he hadn’t got subbed off, I’d never have known he was playing. He was never going to influence the game out wide on a plastic surface. Mata’s days sadly looked numbered.

Had a couple of sighters and a few promising moments as he tried to provide the missing link between midfield and attack for United. The 19-year-old is going to be a very good player, but this was not his night.

Got taken off shortly after the hour. There is too much pressure on the 21-year-old to be United’s go to match winner. His effort levels cannot be questioned but he shouldn’t be playing in this position.

Missed a sitter and was always on the fringes. Never got into it, and the fact he’s being asked to carry United’s non-existent attack having only just turned 18 says it all.

Why is he still on free-kicks? You’d think someone would tell him to step away.

Put United’s best chance wide, and went off injured at the death. Failed to make an impact.