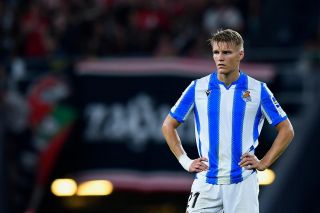 Manchester United have reportedly set their sights on Real Madrid youngster Martin Odegaard, with Arsenal, Liverpool and Manchester City said to be interested in signing him.

The 20-year-old joined Real Madrid in 2015 and has struggled to make much of an impact. Most of that time has been spent on loan to gain experience and game time.

However, Odegaard’s move to Real Sociedad appears to be having the desired effect, as he has bagged two goals and two assists in seven outings which has sparked speculation over potential interest from the Premier League.

READ MORE: One out, one in: The rebuild at Man Utd is being handled poorly

That doesn’t mean Madrid will be open to selling Odegaard when his loan move ends, but money talks and over the course of the season teams will learn more about his consistency and reliability.

According to The Sun, United are said to now be keeping tabs on the talented youngster, although, Arsenal, Liverpool and City are all said to be keen on getting Odegaard’s signature.

The report adds that Odegaard could be prised away from the Bernabeu for around £25m next summer, but that decision will be made by the Spanish giants. It seems a bit low for a player who had his reputation not long ago as a starlet.

Ole Gunnar Solskjaer is trying to build the next great young team and Odegaard could opt to be part of that if United make a move next summer.