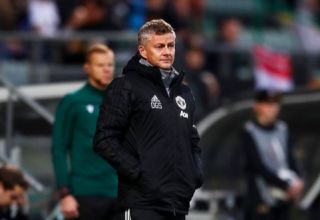 Manchester United’s Europa League game against AZ Alkmaar has ended in an all too predictable stalemate.

It was another lacklustre performance by the Reds, despite boss Ole Gunnar Solskjaer making eight changes after the 1-1 draw against Arsenal.

Eredivisie side Alkmaar were by far the superior team on the night and serious questions have to be asked about this performance.

United managed no shots on target throughout the 90 minutes, and Solskjaer was particularly let down by his midfield duo.

Fred and Nemanja Matic were bot extremely poor, and consistently wasteful in possession against an opposition they should have dominated.

The pair instead were overrun and outclassed, providing no platform for Daniel James, Mason Greenwood and Angel Gomes to attack from.

Solskjaer’s men will have to improve significantly on Sunday as the Reds take on Newcastle at St James Park.

See what fans made of tonight’s performance:

Since United fans are now just customers, they should all be refunded since the product didn't perform as advertised.

How did Nemanja Matic have the audacity to tell Sky Sports about good he is and how United would challenge for the title if they play him?

No shots on target. Not even a real go. When do we start looking at ole or is that still not aloud. ??

Well that was rubbish. United didn't manage a shot on target. Solskjaer still waiting for his first away win as permanent manager.

– Really bad
– So, so, so bad
– Toothless in attack
– Matic and Fred = pathetic
– 8 away games without a win
– Williams OK on debut
– Utd denied stonewall penalty
– Lingard pulls hamstring
– To reiterate: SO BAD
– Thank God it’s over at least 🤣 pic.twitter.com/30miWMgJH1

I’m a supporter of Solskjaer. The question I ask of every manager is this though; is he getting the best out of what he has? #MUFC

We have no plan against the likes of AZ Alkmaar, Astana and Rochdale but yet we’re supposed to give this project time. There is NO sign of anything even happening to give it time. We’re supposedly playing attacking football & haven’t scored more than one goal in nearly 2 months.