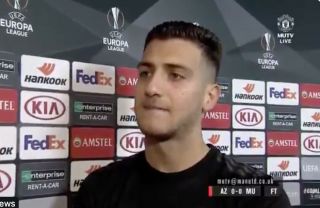 Diogo Dalot may be right when he says it was a ‘good point’ to take away from our Europa League away tie with AZ Alkmaar, but that shows how far Manchester United has fallen.

It used to be good to get a point away from home in the Champions League whereas now we’re scrapping against second-rate sides in a second-rate competition.

Tonight United drew with AZ Alkmaar on a dodgy surface but the performance was even worse.

“Tough game, difficult pitch, difficult opponent, they play very well. We keep a clean sheet and it’s a good point away from home,” said Dalot, as per the Manchester Evening News.

“I don’t want to say every time that the pitch was difficult but we need to pass good and cross good, We need to keep the positives, look to improve and I think today was a positive with the clean sheet.

“David did some good saves, he’s there for doing that and we’re there to stop as much as we can, we try until the end and we did some good defending against a good team.”

All this does is further prove the genius of Sir Alex Ferguson, who won the league in 2013/14 with a team many didn’t think was good enough. It’s obviously a different set up now, different team, but things aren’t improving.

Our performance levels dropped immediately. You may have preference over different football philosophies may — some more entertaining than others — but no manager since Sir Alex has got the most out of his players as a unit.

Of course, Dalot isn’t wrong. It’s a point away, we’ll take it after beating FK Astana at home, but don’t tell me this is what we’ve come to settle for because it’s not good enough. I’m sick of hearing about improvements and not seeing it.

How about back up what you’re saying on the pitch next time out?