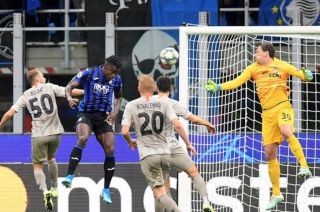 Another defeat for Atalanta in the Champions League but their highly-rated striker, who has been linked to Manchester United, got on the scoresheet again.

A goal deep into stoppage time by substitute Manor Solomon snatched all three points for Shakhtar Donetsk as they beat Atalanta 2-1 in their Champions League Group C clash in Milan on Tuesday.

The Italians were looking to bounce back from a 4-0 opening day defeat to Dinamo Zagreb, but it wasn’t to be tonight…

They missed a golden chance to take the lead when Josip Ilicic’s 16th minute penalty was saved by Andriy Pyatov, but the goalkeeper was unable to stop a header from Colombian striker Duvan Zapata 12 minutes later.

The same player was linked to United during the week, as per Italian outlet Calciomercato.

The United target scored Atalanta’s first ever goal in the Champions League and he has the Shakhtar Donetsk goalkeeper to thank for failing to judge the crossed ball.

Still, Zapata was in the right place at the right time and he took his goal very well.

United don’t have a striker currently who is renowned for scoring goals with his head. It’s always a good solution to have even if it comes from the bench.

Unfortunately for Atalanta, it wasn’t enough for them to take a point from the game. They conceded a winner late on and have yet to win a match in the Champions League.