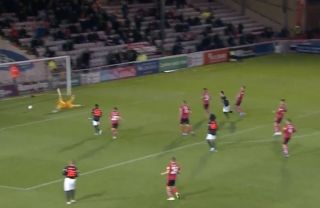 Two wins from two in the EFL Trophy thanks to a James Garner first-half goal against League One side Lincoln.

Manchester United took the lead in the 20th minute against the run of play.

Tahith Chong, who recently got minutes under Ole Gunnar Solskjaer in the first team, played a through ball to Garner who finished from 20 yards out into the bottom corner to put United ahead.

United grew into the game as the clock ticked on. Chong came to life too given he was quiet before providing the assist. He was withdrawn at half-time, so the Dutch youngster could be in line to face AZ Alkmaar on Thursday night.

Watch the goal below (footage from MUTV):

Not only did Garner score the only goal of the game, he saved United with a clearance off the line in the second half.

The following players were missing for the game which could see them travel with the first team ahead of Thursday’s Europa League encounter against AZ Alkmaar: Brandon Williams, Ethan Laird, Angel Gomes, D’Mani Mellor, George Tanner, Luca Ercolani and Alex Fojticek.