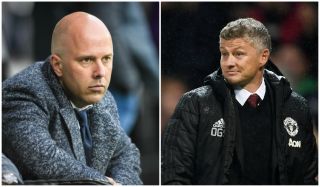 Manchester United could take control of Europa League Group L with a win on Thursday night at AZ Alkmaar.

Ole Gunnar Solskjaer speaks to the press later today after United train in Rotterdam and we’ll have more updates on the team.

But here are some things you should know ahead of the game, along with some talking points and interesting snippets of information:

– The Reds face a 300-mile trip to Holland today after a big Premier League encounter on Monday night. It makes you wonder who exactly is in charge with scheduling games, with Arsenal also involved in the second-rate competition tonight.

– Paul Pogba played against Arsenal despite doubts over his ankle and the latest on the Frenchman is that he could sit out tomorrow night’s game after aggravating his ankle injury, as reported by ESPN. United struggle without the midfielder so we can afford to take the hit for this game to ensure he’s back for Newcastle and fit after the international break to face Liverpool.

Manchester United upcoming fixtures:
AZ (A)
Newcastle (A)
Liverpool (H)
Partizan (A)
Norwich (A)
Chelsea (A)
Bournemouth (A)

6 out of the next 7 games are away.
Nightmare.

– Throwback to the greatest night of Ole Gunnar Solskjaer’s managerial career to date because Manchester United haven’t won away from Old Trafford since then. The famous PSG comeback last March! That’s six months ago so we really need to fix that this week.

– We don’t think Pogba will be risked against AZ Alkmaar and the same goes for Marcus Rashford. He too was a doubt for the game against Arsenal but played and didn’t have one of his better performances. The match is taking place at the Vars Jeans Stadium which has a plastic pitch. Any players coming back from recent injuries should be nowhere near this one.

– Aaron Wan-Bissaka might return after missing Monday’s game with tonsillitis. Anthony Martial will “definitely” miss out, the boss said after the Arsenal draw. Luke Shaw could start after returning to full training last week.

– AZ Alkmaar are just one point behind Ajax and PSV Eindhoven at the top of the Eredivisie. They can boast three consecutive clean sheets and there’s a familiar face in defence with former Aston Villa defender Ron Vlaar.

– This is a chance for Sergio Romero to play against his old club. Chris Winterburn also calls it the Louis van Gaal derby, as seen below:

Louis van Gaal derby for Manchester United being drawn with AZ. It’s about the only real thing of note for United from that draw, other than monumental amounts of travel.

Hopefully the Reds come away with another three points and this time it’s an encouraging performance by Solskjaer’s men.