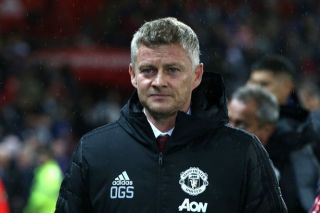 Manchester United put in another poor performance on Monday night against Arsenal in a desperately feeble showing from both sides. It is hard to keep positive and award Ole Gunnar Solskjaer more time to turn things around but that is what the fans must do.

In the build up to the game Solskjaer talked about the changes he and his staff were making at Old Trafford, as per Sky Sports: “For us it’s about building a new culture, building a new team, bringing everybody together.”

The Norwegian may be changing the culture and transforming the playing squad, but he is far away from achieving his goal of bringing everybody together. Some fans are calling for his head after becoming increasingly frustrated with uninspiring performances and disappointing results to match. Others believe in the long-term project and can see some progress being made, but the disjointed fan base sums up the fractured nature of the state the three-time European champions find themselves in.

Solskjaer is losing the trust of a growing section of fans and is not hard to understand why. The draw against Arsenal means United have only won two of their first seven league games, meaning the Red Devils currently lie in 10th position in the table and some 12 points behind bitter rivals Liverpool. It is not only the results that have angered some of the Streford End faithful, the performances have also been way below par, the latest fixture especially. The heart and desire of some players is more than questionable, and the talent required to play for Manchester United is clearly void in too many of the current playing squad.

Ole deserves more time to turn things around though. United fans need to realise the majority of the current team are not up to scratch and whoever is stood in the dugout cannot change that fact. Solskjaer has proven he is more than capable in the transfer market by clearing out the deadwood and bringing in three good signings who have arguably been United’s best performers of the season so far. The Old Trafford club are desperately lacking a natural goal scorer who can get 20+ goals a season and creativity to make those chances. Ole has obviously identified these issues though, “Of course, when we let Alexis and Lukaku go, you don’t have to be a rocket scientist to know it’s a forward we’re going to try and recruit next time” he said before Monday’s game. The former United striker continued, “We’re looking for some creativity and goals, but they (the potential new signings) have to be the right one. There were strikers available but not the ones we wanted. We couldn’t get the one we wanted (last summer).” In order to get the right players to fit your sides transfer policy and style of play, sometimes you have to be patient. Look at Pep Guardiola and Manchester City for example, they wanted Jorginho last summer to replace Fernandinho but he chose Chelsea instead. They didn’t rush back into the market and buy someone who wasn’t the right fit, they waited another year before buying Rodri who suits their system perfectly.

United have been linked with 33 year-old striker Mario Mandzukic recently and although he is a good player, he is not the sort of signing that will improve the team in the long term or fit into Ole’s style of play. Too many old players have been signed recently on high wages that have underperformed (Falcao, Sanchez, Schweinsteiger etc.). United appear to have moved away from that transfer policy under Solskjaer and that is something that should be applauded and stuck to. “When you get players in, you need the right ones that are going to stay here for a long period of time and that’s the long-term thinking we have to show.” Stated the Old Trafford boss. You can’t build a title winning side in one transfer window, it took Klopp four seasons before he won a trophy at Liverpool and although Guardiola only had one trophy-less season at City, he still overhauled the side he inherited.

Ole should be awarded time and at least two more transfer windows before people make their final judgement on him. The fans are right to be frustrated at the style of play and tactics used by him since the away victory against Paris Saint-Germain though. They may glance over at Stamford Bridge and witness a far from polished side under Lampard who are also in a transitional phase, but Chelsea play entertaining and attacking football, scoring lots of goals and have a manger that fully trusts his youth players. If United were easier on the eye, more enjoyable to watch and played the likes of Mason Greenwood and Angel Gomes from the start, perhaps the fans would be less demanding on the results and more accepting of the progress Solskjaer is making in this difficult period for the club.

A manager’s success is limited by the players at his disposal. Ole has shown he knows the requirements of a Manchester United player in the previous transfer market and should be backed in January and next summer, particularly after the club announced a record revenue recently. If the performances and results still don’t improve after three or four top arrivals enter the Old Trafford dressing room, then the time should be up with the United legend.