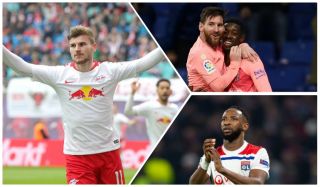 It’s always difficult to complete top signings halfway through the season, with clubs even more reluctant to leave their best players go when they’re still in European competition or challenging for domestic titles.

United have identified RB Leipzig and Germany forward Timo Werner, Barcelona’s Ousmane Dembele and Lyon striker Moussa Dembele as their top targets, according to the Transfer Window Podcast, as cited by the Manchester Evening News.

Manager Ole Gunnar Solskjaer has been short of options up front this season, due to injuries to Anthony Martial and Marcus Rashford. He won’t regret his decision to sell Romelu Lukaku in the summer — and allowing Alexis Sanchez to leave on loan — but Solskjaer definitely wishes he had signed a replacement/goalscorer before the transfer deadline.

None of the three strikers mentioned will come cheap, and it remains top be seen if their clubs can be tempted to sell in January.

Werner has been linked with a move to Liverpool in the past but a deal clearly never materialised. He had made 27 appearances for the Germany national side, scoring 10 goals. Transfermarkt value the striker at £58.50m.

Duncan Castles of the Transfer Window Podcast claims Ed Woodward is eyeing Barcelona’s Dembele, formerly of Borussia Dortmund, as an ideal signing to suit his and Solskjaer’s agenda. The reporter claims Dembele’s arrival would appease both Woodward and Solskjaer:

“Ousmane Dembele as a striker is an interesting concept,” Castles said on the podcast.

“It’s more driven by Ed Woodward knowing Dembele is on the market and knowing Barcelona still need to raise funds to abide by FFP.

“I think it’s a hybrid between his desire to sign high profile players and someone who has huge amounts of pace and is relatively young which fits the Ole Gunnar Solskjaer rebuild model.

“But a huge number of issues with the player’s attitude, looking after himself physically, the number of muscular issues he has had.”

He was left out of the Barcelona squad at the weekend with another injury.

Formerly of Fulham and Celtic, he has handled the transition to France well and was of interest to United in the summer.

He managed 20 goals for Lyon last season and is currently top scorer in Ligue 1.

I wouldn’t hold my breathe but something needs to be done about United’s lack of goals.