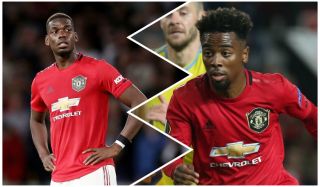 The manager has named a 21-man squad for the trip and Mason Greenwood, who scored the only goal in United’s win over FK Astana, is again included in the squad.

Tahith Chong and Brandon Williams also travel with Solskjaer keen to give his youngsters experience in European competition, which will hopefully stand to them when United get back into the Champions League, granted they’re all still at the club when that eventually happens.

Gomes is back after recovering from an injury and he was one of United’s few stand out players from the opening Europa League encounter of the season.

The big news from the confirmed squad is Paul Pogba’s exclusion, as the club revealed that the midfielder “requires a period of further rest and conservative treatment for the foot injury he sustained during the game against Southampton in August.”

Solskjaer will hope to have the World Cup winner back for Sunday’s trip to Newcastle United.

Aaron Wan-Bissaka hasn’t travelled and will stay at home to recovery from a bout of tonsillitis.