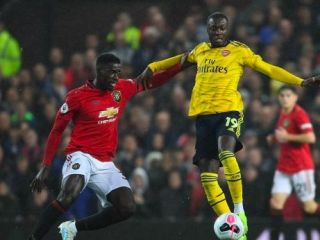 Manchester United manager Ole Gunnar Solskjaer has explained his decision to start Axel Tuanzebe at left-back in the disappointing 1-1 draw against Arsenal.

Tuanzebe was the surprise selection by Solskjaer on the night, but when the lineups were announced many had expected the youngster to play at right-back.

Instead, Ashley Young played on the right and Tuanzebe was tasked with defending against Arsenal’s record signing Nicolas Pepe on the flank.

Solskjaer praised Tuanzebe’s performance on the left, despite a costly error that eventually led to Arsenal’s equaliser through Pierre-Emerick Aubameyang.

“That showed by him playing well against Pepe,” the Norwegian said as quoted by Manchester Evening News.

“I think Pepe’s a threat and Axel did really well. We’ve had a few injuries and illnesses and that was a decision when Aaron wasn’t fit to play.”

Tuanzebe did nullify the threat of Pepe, who, in truth, had an extremely poor game on Arsenal’s right-wing.

However, the key moment in the game came where Tuanzebe’s poor pass out from the back was intercepted, allowing Aubameyang to equalise.

It’s a shame that Tuanzebe’s almost flawless performance in the unfamiliar role was tarnished by the 58th minute mistake, but the 21-year-old will learn and get more chances to impress Solskjaer as the season progresses.

Aaron Wan-Bissaka’s absence was a big blow before kick off given the stability he has given the Reds in the full-back position at the start of the season.

Hopefully the England u21 international can make a return for the Europa League trip to AZ Alkmaar on Thursday.