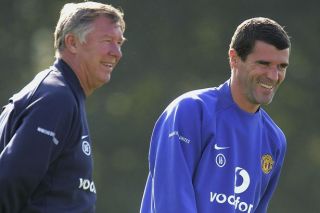 Roy Keane was asked about life under Sir Alex Ferguson and have a brilliantly insightful response on various aspects of his time at Manchester United.

Keane was a guest pundit on Monday Night Football as United drew 1-1 with Arsenal, a future he had many fierce battles in as a player.

The Sky Sports panel had an excellent in-depth discussion with the Irishman on his career.

A significant portion of the chat was about his time at Old Trafford, and former Liverpool defender Jamie Carragher set the tone by asking about his relationship with Sir Alex Ferguson during the good times before the pair fell out.

We hear constantly about how they don’t see no eye-to-eye and Sky Sports did well to gloss over that because it tends to become pantomime esque.

Keane says Fergie was very good to him and always felt they had a professional relationship.

Both players wanted to win and do what was best for Manchester United.

Further, Keane backed himself and his role in the dressing room as his career went on, but admits he made mistakes too.

It’s the honesty that attracts us to Keane’s punditry.

Watch the clip with Keane below via Sky Sports:

“I think we both really loved and wanted to do what was best for Manchester United.” ❤

Roy Keane lifts the lid on his relationship with Sir Alex Ferguson and the Manchester United dressing room. 🔴 pic.twitter.com/a93a85L6bH