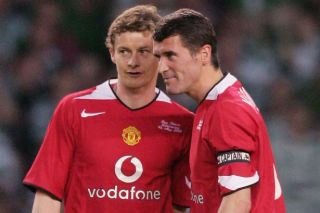 Roy Keane feels that Manchester United should stick to Ole Gunnar Solskjaer despite their challenging start to the season.

The Red Devils were held to a 1-1 draw against Arsenal at Old Trafford on Monday night. Scott McTominay opened the scoring with a great strike, while Pierre-Emerick Aubameyang netted the equaliser before the hour mark.

Solskjaer’s men had a few scoring chances but really should have tested Arsenal goalkeeper Bernd Leno more throughout the game. And despite earning just nine points from their first seven matches, Keane feels that the club should support the Norwegian manager.

Speaking to Sky Sports as a guest pundit on Monday Night Football, the former United captain said: “They’ve given him the job and the contract, so support him and let him get on with it. Give him a couple of transfer windows. Are there more tough days ahead? You can bet your life there is. But they have to prepare.”

Things will get worse again before they get better.

Solskjaer must continue with the same philosophy he believes in but my big question stems from the form we seen when he took over as caretaker manager last December.

Tactically, we were all chatting about how he pulled the wool over Mauricio Pochettino last season, but now that style of performance hasn’t been seen in a very long time. The cutting edge has disappeared.