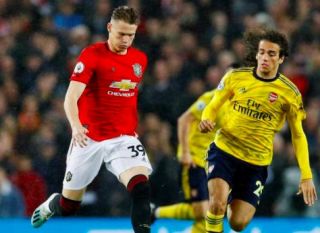 Scott McTominay was comfortably Manchester United’s best player in the disappointing draw against Arsenal at Old Trafford on Monday night.

It turned out to be yet another poor result for the Reds, after yet again failing to capitalise on a 1-0 lead.

Ole Gunnar Solskjaer’s side needed three points, but are now sitting in 10th position in the league after seven games.

The Reds yet again failed to convert a narrow lead into victory, as they did against Southampton and Wolves earlier this season, but a bright spark on the night was certainly the performance of Scott McTominay.

One of seven academy graduates to feature for United on the night, McTominay was the driving force in midfield and took the game by the scruff of the neck.

Despite operating in defensive midfield, Mctominay was the one making the driving runs into the box, and looked the most likely to create anything meaningful for the Reds going forward.

The Scottish international got headlines for his excellent finish past Bernd Leno 20 yards out to give Solskjaer’s men the lead on a sodden night in Manchester, but it was his overall efforts that pleased United fans the most.

See the the 22-year-old’s impressive stats on the night, compiled by Statman Dave below: