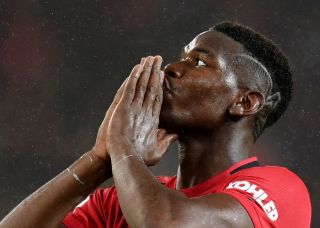 Robin van Persie would have had a keen eye on Manchester United vs Arsenal last night considering the Dutch striker played for both Premier League clubs.

The former United striker was asked about Paul Pogba after the 1-1 draw at Old Trafford.

He had this advice for Ole Gunnar Solskjaer on dealing with Pogba:

“For him, the coach, for us, for everyone, it’s just important to choose a position,” Van Persie said following the game, as quoted by the Manchester Evening News.

“Choose where you think, and the coach thinks, he plays the best football for himself and for the team.

“I would play him not as a defensive midfielder, and not as a number 10 but in between — number eight position. So, he still has his freedom, he’s not judged then on 20-plus goals a season, if he scores 10-plus goals, makes assists, everyone will look differently at him then, but it needs to be clear for everyone.”

There’s no denying that Pogba is United’s best player. Whether he plays or not we seem to struggle, but the manager must find a way soon to get the best out of the Frenchman.

He should be winning games and getting into positions to do some. Perhaps giving Pogba a free roam role wouldn’t be the worst idea, but first it would be wise to have the right foundations in midfield.