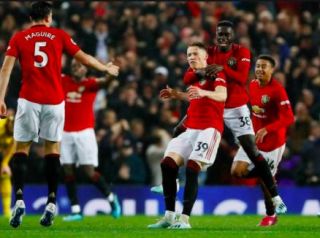 The game lacked any rhythm throughout and depicted how far both sides have fallen after competing for league titles over a decade ago.

There were very few real moments of real quality on a sodden night in Manchester, with Scott McTominay’s driven strike the highlight for United fans.

Ole Gunnar Solskjaer’s side yet again failed to capitalise on taking the lead in a Premier League game, after relinquishing leads against Southampton and Wolves already this season.

The point leaves United 10th in the league on nine points after seven games, with Unai Emery’s Arsenal remaining fourth on 12 points.

Former Blackburn Rovers striker Sutton sarcastically commented that the game was the best of Premier League football, and stated the Reds and Arsenal would struggle to finish ahead of Celtic in the Scottish Premiership with that type of performance.

In reality, United and Arsenal are still streets ahead of the poor levels in the Scottish game, but Sutton’s comments are true to the extent that the game wasn’t a great advert given it was supposed to be two of the most accomplished sides in the league.

Would struggle to finish in Scottish Prem top 2 on that showing… https://t.co/elmfcvPytm