Solskjaer is likely to make several changes for the game, with the Premier League fixture against Newcastle at St James Park coming up just three days later.

United will play at the Kyocera Stadium in The Hague, which is 70 miles from Alkmaar’s usual ground.

The Eredivisie side’s usual ground collapsed last month, and the Daily Mail reports that the Reds will have to play on a plastic pitch known for causing players injuries.

Solskjaer will be desperately hoping to avoid further injury concerns with Anthony Martial, Paul Pogba and Diogo Dalot among the players out through injury.

We expect Sergio Romero to retain his place in goal after keeping a clean sheet against FC Astana. Meanwhile, Marcos Rojo could return at left-back with Luke Shaw still a fitness doubt for Thursday’s game. Axel Tuanzebe should start in his preferred role at centre-back after filling in at full-back against Arsenal on Monday.

Juan Mata has to be given the chance to impress in attacking midfield after Jesse Lingard yet again failed to influence the game against Arsenal. Fred made a brief appearance against the Gunners and we expect the Brazilian to partner Nemanja Matic in holding midfield.

Mason Greenwood celebrated his eighteenth birthday on Thursday and his performances in recent games should be rewarded with a start here. Tahtih Chong may also be given another chance after failing to impress against FC Astana in the first Europa League game against Astana. Solskjaer seems reluctant to give Marcus Rashford a rest, but it’s clear he need one. If the England international is rested, fellow academy graduate Angel Gomes could come in and Greenwood could start through the middle.

See a potential line-up below: 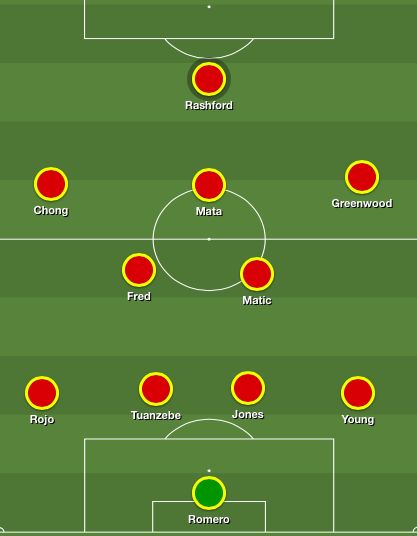