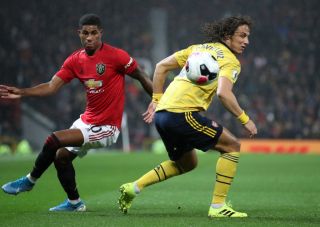 Shortly before 4.30pm on Sunday 28 February 2016, the life of a young man born four miles down the road from Old Trafford in Wythenshaw changed forever. Arsenal were in town, and his first game against the Gunners would be one this precocious young striker would never forget.

The world had first become aware of an 18-year-old Marcus Rashford when he was plucked from obscurity to make an eleventh-hour debut against the rank Danish outsiders of FC Midjylland in the Europa League three days hence thanks to Anthony Martial’s injury in the warm up.

He scored twice that night and followed that up with another double and the assist here as United spectacularly derailed title-chasing Arsenal to catapult himself into the national spotlight in pinch-yourself fashion. Rashford became the name on the lips of every Red and the Old Trafford faithful had a new local hero. The rest, as the saying goes, is history.

The latest fresh-faced teenager to step off the Carrington conveyor belt has the world at his feet and looked set for stardom. Everyone thought he would be the answer up front. Three years on, and there are more question posed than questions answered. Just what exactly is he? A winger who can do a job up front? A number 10? A CAM? A player forced to play up front against his wishes because of a lack of other options? One thing he certainly is not is an out and out striker. In the last three seasons, his goal tally has been 11, 13 and 13. He’s scored only once from open play in the last 16 games and although he prefers to play through the middle he doesn’t have the instinct or intuition to hold sway as a striker.

Three years on, and where his first meeting with the Gunners would be unforgettable, this is one you feel he’ll want to forget in a hurry. It was a disasterclass. Mason Greenwood has scored more goals from open play in his last two games than Rashford has managed in over six months – a damning statistic. He should have started instead and offered more in his brief 15-minute cameo than his more senior colleague managed in the previous 74. In much the same way that Rashford burst on to the scene in a game like this, Greenwood is doing the same now.

Ultimately with Rashford, you feel that here is a young player – and remember he is still only 21 – that has just lost his way. Since bursting on to the scene, he has failed to justify the hype. He isn’t a bad player, he just isn’t as good as we all thought he would be. Rashford hasn’t looked right since that game in February when he played on one leg against Liverpool, soldiering on bravely with an injury-ravaged United having already made all three subs. Where before he would bust a gut to latch on to a through ball and finish with a flourish, now he is doubting himself. Snatching at chances, hesitating on the ball, making the wrong decisions and either arriving in the box too early or too late.

Before, whenever you watched him, Rashford would get you off your seat and standing up in anticipation. Every time he got the ball, something would happen. Now, you just want to cover your eyes and wait for the inevitable sight of him standing, waving his arms around as a chance goes begging and the ball awry. As for his set pieces, don’t even get me started.

There are echoes of another of his more illustrious striking predecessors in Wayne Rooney. Rooney burst onto the scene at 16 and was at the peak of his considerable powers in the early days of his career. Thereafter, Wazza’s halo began to slip – his body battered and energy sapped by being a virtual ever present for both club and country. He was hardly ever rested and his unyiedling determination to work, hassle, harry and press opponents into submission ultimately took its toll.

It is not dissimilar with ‘Rashy’ – he may not have the same all-action style that Rooney did, but he plays week in week out without ever getting a breather. He’s been overplayed to the point where it’s threatening to harm his career and for that you have to look at the management. It is no surprise that he struggled with injury and had to go off against West Ham. He’s shattered and totally burned out. The best thing to do would be to take him out the team and give him a rest.