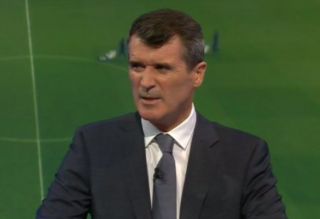 Roy Keane has hit out at Nicolas Pepe following his performance in Arsenal’s 1-1 draw with Manchester United on Monday evening.

An opening goal by Scott McTominay on the brink of half-time was ruled out by a Pierre-Emerick Aubameyang equaliser before the hour mark.

But Pepe has yet to find his best form since joining the Gooners from Lille in the summer. He arrived as their record signing after costing the club a whopping £72m.

The Ivory Coast international was handed another chance by manager Unai Emery to impress last night but he was substituted with 16 minutes left on the clock.

Keane hasn’t been impressed with the start Pepe has made at Arsenal and we reckon quite a few Arsenal fans will be nodding in agreement.

“Disappointed with him since he’s come to the club,” Keane told Sky Sports, a quoted by The Metro.

“Not great body language… okay, sometimes we make excuses for players a lot, it takes time to settle into a club.

“You see this young kid tonight [Saka], Pepe compared to him for the money they paid, he needs to do a lot more.

“His work rate, his lack of quality, end product, his body language.

“He didn’t seem up for the fight tonight.”

Whether Pepe was up for the fight or not, he looked nervous against United. There was one attempt on goal that went high and wide that, in the lead up, he just rushed his effort.

It may take Pepe time to adjust to the English game but right now I think United dodged a bullet with the former Lille winger.

United were linked with Pepe throughput the summer, as per reports in France.