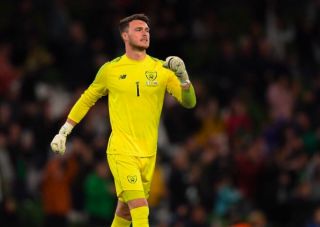 Manchester United loanee Kieran O’Hara has received another call-up to the Republic of Ireland squad.

O’Hara made his debut for Mick McCarthy’s side in the 3-1 victory over Bulgaria last month, and has again been selected for the European Championship qualifiers coming up against Georgia and Switzerland.

Ireland face a trip to Georgia on October 12 before the away game against Switzerland on October 15 in Euro 2020 qualifiers.

McCarthy’s side currently lead their group after five games, ahead of Denmark and Switzerland.

O’Hara is enjoying a season-long loan spell at League One Burton, where has has already made five clean sheets this season.

The 23-year-old is currently behind Middlesbrough ‘keeper Darren Randolph and Bournemouth shot-stopper Mark Travers in the pecking order in McCarthy’s squad.

Congratulations on the call-up Kieran!