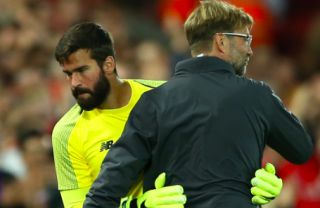 Liverpool boss Jurgen Klopp has revealed that goalkeeper Alisson Becker will return for the game against Manchester United at Old Trafford on October 20th.

The Brazilian goalkeeper pulled his calf on the opening day of the Premier League against Norwich on August 9, and has been ruled out since.

Alisson recently won the award for Best Men’s Goalkeeper 2019 at the Fifa Awards and has been one of the key figures contributing to Liverpool’s success in recent months.

And Klopp confirmed he will definitely be back in time for the upcoming clash against United.

“There are two opinions. One is Ali’s and the other one is the medical department,” Klopp said as quoted by the Liverpool Echo.

“We should wait. We have to see. He’s training well but it was a serious injury. We won’t take the risk with him.

“We’ll have to see for Leicester but Manchester United is 100 percent.”

Whilst Alisson is an important player for Liverpool, replacement goalkeeper Adrian has done a more than adequate job in replacing him.

Despite the Brazilian international’s injury, Liverpool still hold a five point lead in the Premier League and will go into the game against Ole Gunnar Solskjaer’s side extremely confident they can secure victory.

Solskjaer’s Reds are already 12 points behind Liverpool in the table after just seven games have been played.