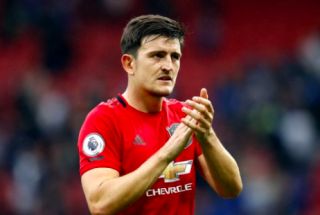 Harry Maguire has revealed that he wants to become captain at Manchester United in the future.

The England international joined the Reds from Leicester for a world record £80m fee this summer, and has settled in well at Old Trafford.

Ole Gunnar Solskjaer prioritised an established centre-back in the summer transfer window, and finally got his prime target to partner Victor Lindelof in defence.

Maguire is the authoritative figure in Solskjaer’s defence, and has slotted in comfortably alongside Lindelof at the back.

He clearly has blossoming leadership qualities and is one of the more vocal in United’s young team at the moment.

NEXT:Why Solskjaer made decision to start Tuanzebe at left-back against Arsenal

When asked if he would become United captain on the United Review, Maguire said:

“Definitely. It’s something I still want to improve on, my leadership qualities on the pitch and especially my talking.

“I want to demand more from the players, demand standards, but I’m obviously not concentrating on that at the moment.

“I’m fully focused on improving the team and getting this club back to where it should be.”

Ashley Young is currently the club captain at Old Trafford and retains the armband when on the pitch. David De Gea has also been made captain in Young’s absence, but Maguire is a realistic candidate to lead the Reds in the future.

Solskjaer has already revealed it is in his head to make Maguire United captain, so it will be interesting to see if he gets the armband when Young eventually leaves the club.

Axel Tuanzebe is also being considered as a future Reds captain, after Solskjaer surprisingly selected him for the role in last Wednesday’s Carabao Cup tie against Rochdale.