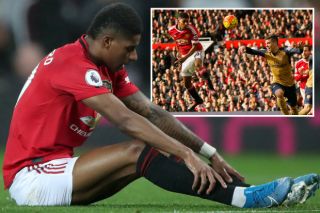 Marcus Rashford’s ongoing struggles are partially because Manchester United don’t have a player creating chances for him.

People are likely to criticise Rashford for the lack of goals scored by the England international, but there’s also the view that he is not a no.9 and would be best to focus building his career around playing in wide positions.

Even looking at getting into the England team, Rashford is not going to be starting games as a centre-forward ahead of Harry Kane. And if he doesn’t cement a wide position now it will end up going to Borussia Dortmund sensation Jadon Sancho who is constantly improving.

Higginbotham was speaking on talkSPORT this morning, which you can listen to in the video below:

“Centre-forward is the biggest position where confidence is needed.”

“People are talking about the fact he hasn’t score many goals this season.”

“But #MUFC are missing a playmaker who can set him through on goal.”@Higginbotham05 has his say on @MarcusRashford’s lack of goals. pic.twitter.com/g6HRuEnFgv

Rashford snatched at shots against Arsenal on Monday night and didn’t seem to be at his best.

Higginbotham doesn’t think Rashford gets many clear-cut chances on goal and believes United are missing a quality playmaker to pull the strings.

But could that also be down to Rashford’s positioning inside the box? If he doesn’t find the right area, how can the players around him provide the service needed to score goals?

Angel Gomes should be listening to this as inspiration for the rest of the season. That role could be his as it seems wasted on Jesse Lingard and Juan Mata won’t play every week.

If only United got that deal for Paulo Dybala over the line.