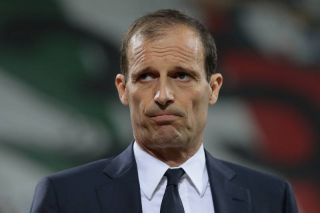 Although Manchester United are giving us no reason to think they’re going to sack Ole Gunnar Solskjaer anytime soon, Massimiliano Allegri seems to be under the impression the managerial job at Old Trafford could be up for grabs soon.

Italian reporter Fabrizio Romano reports for the Guardian, claiming the former Juventus boss has been learning English as he targets a new role in the Premier League, with Allegri keen on taking over from Solskjaer should United sack the Norwegian.

We don’t think United are about to sack Solskjaer and Allegri would be too high maintenance for Ed Woodward, who won’t want to work with another domineering manager like José Mourinho again.

It may seem harsh to call Allegri domineering on the same scale as Mourinho, but I don’t mean it in a negative way. The Portuguese coach identified weaknesses in his United team and Woodward decided to ignore that. And, if Allegri was to come to United he’d want to ensure that it doesn’t tarnish his reputation as a manager.

Allegri left Juventus at the end of last season after winning a fifth consecutive Serie A title. He is said to have attended Tottenham Hotspur’s Champions League clash with Bayern Munich, with the Germans thrashing Mauricio Pochettino’s men 7-1 at White Hart Lane.

The report adds that United have no intention of sacking Solskjaer, who signed a three-year contract in March, but Allegri is supposedly on a two or three-man shortlist should they change their mind in the near future.

Allegri is said to be interested in the United job regardless of Champions League qualification.