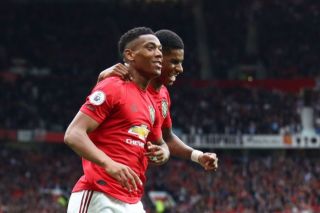 The Red Devils were busy last night hosting Arsenal in a game that finished in a 1-1 draw, leaving Solskjaer’s men 10th in the Premier League table.

Next up is AZ Alkmaar who are currently third in the Erevidisie, one point behind Ajax and PSV Eindhoven.

United have missed Martial through injury for more than a month after he sustained a hamstring injury.

Solskjaer has ruled the France international out of Thursday night’s trip to the Netherlands but Martial may well be in contention to return against Newcastle United this weekend.

That’s United’s final fixture before the international break, and we’ll be returning to a clash against rivals Liverpool so it will be important to have Martial back then.

As quoted by Manchester United’s official website, the Norwegian said: “Maybe the weekend [against Newcastle, he will be back] but if not after the weekend. Definitely not Thursday.”

Martial started the season strongly before getting injured, scoring twice in three matches.

United need to get the 24-year-old back fit as soon as possible with Solskjaer’s striking options very limited.

The Frenchman is, without question, one of Solskjaer’s most important players and he will be edging to get back on the pitch.

AZ Alkmaar will be delighted with the news.